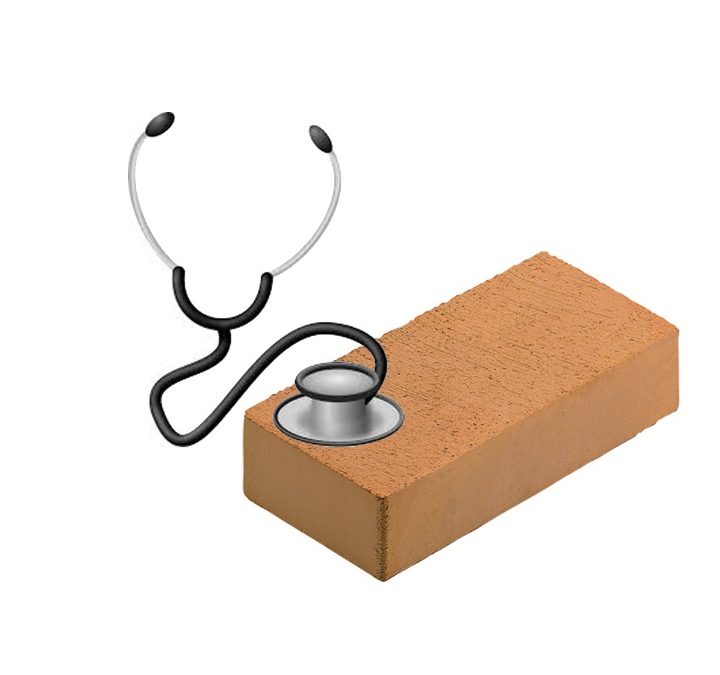 Masonry is one of the oldest techniques that has characterized the history of buildings. Even today, this methodology is a source of research for technicians and researchers, especially since we are attempting to standardise the method of calculation, as we did for concrete and steel. Compared to concrete or steel buildings, masonry buildings have always – incorrectly – been considered as inadequate to the needs of construction, due above all to seismic stress over time.

In the last few years, after an accurate examination on several structures, some of the causes of the structures’ inability to satisfy earthquake regulations were highlighted, including:

These issues led the technicians intensify their on-site inspections with the aim of gaining more information about the structure and all its parts.

To do that, the most widely on-site investigation techniques used today are: 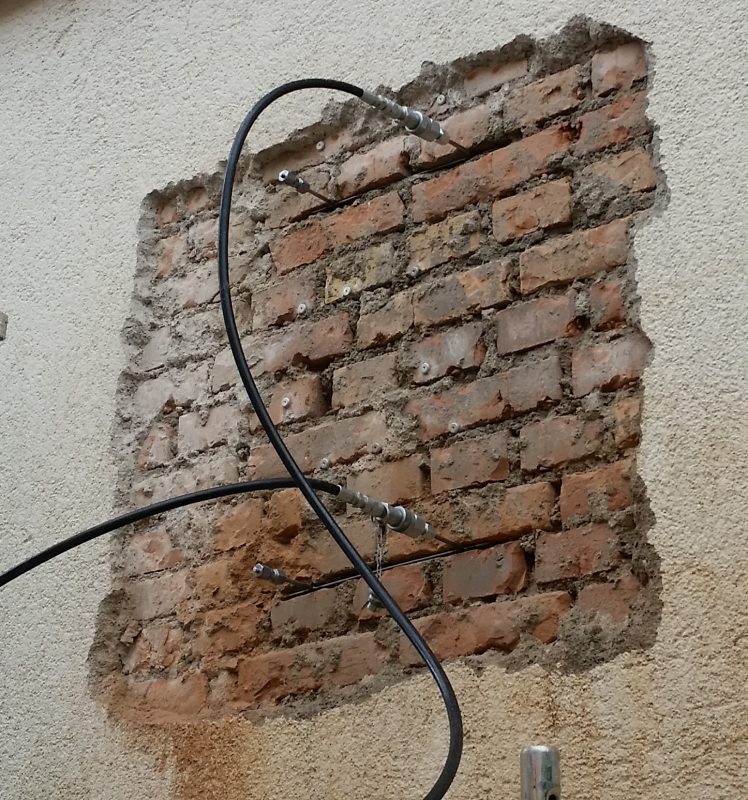 The flat jack method is a diagnostic and non-destructive test used directly on site for existing structures, which enables an experimental investigation to obtain reliable information about the real static conditions of the structure, the stress state and modulus of elasticity. More points of the building are usually examinated to have a representative sample of the results.

First, we have to cancel the stress state by making cuts horizontally and perpendicular to the surface. Then, the initial condition is restored with the use of a flat jack.  Cancelling the stress state, the two sections of wall divided by the cut tend to move towards each other: which was determined in two symmetrically opposite points relative to the cut. The flat jack is placed in the cut and its pressure is gradually increased until the closure due to the cut in the wall is eliminated. Now, the force applied by the jack to the wall is equal to that present before the cut was made, correcting certain factors relating to the ratio between the area of the cut and that of the jack, as well the rigidity of the latter. The two sections of wall are controlled by measuring their convergence at different points, using a removable mechanical deformometer. It is important that each point of measurement be positioned on a section of wall which spans the cut.

To determine the modulus of elasticity, the aim is to determine the local deformability of the masonry wall and run an analysis of the stress/deformation law. This test examines a small section of wall affected by mono-axial compression exercised by two flat jack located in two cuts perpendicular to the surface, at a certain distance. Now, the force applied by the jack to the wall is corrected by certain factors relating to the ratio between the area of the cut and that of the jack, as well the characteristics of the latter.

Composed of two special steel panels, they may be rectangular or semicircular. The flat jack must be calibrated for its pressure/force/deformation ratings. 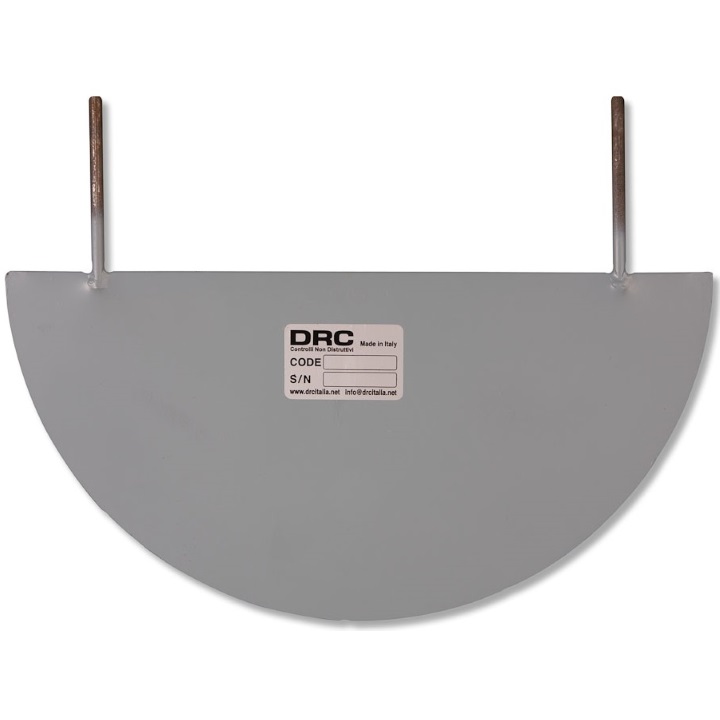 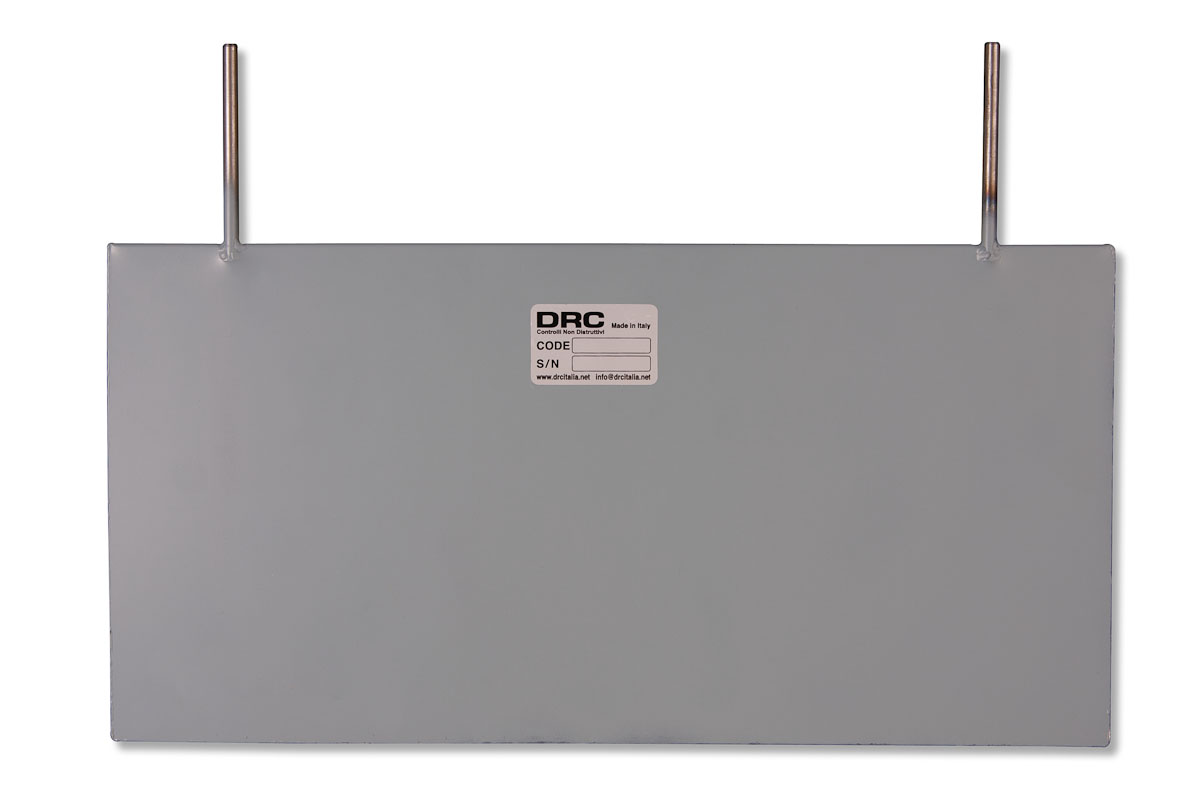 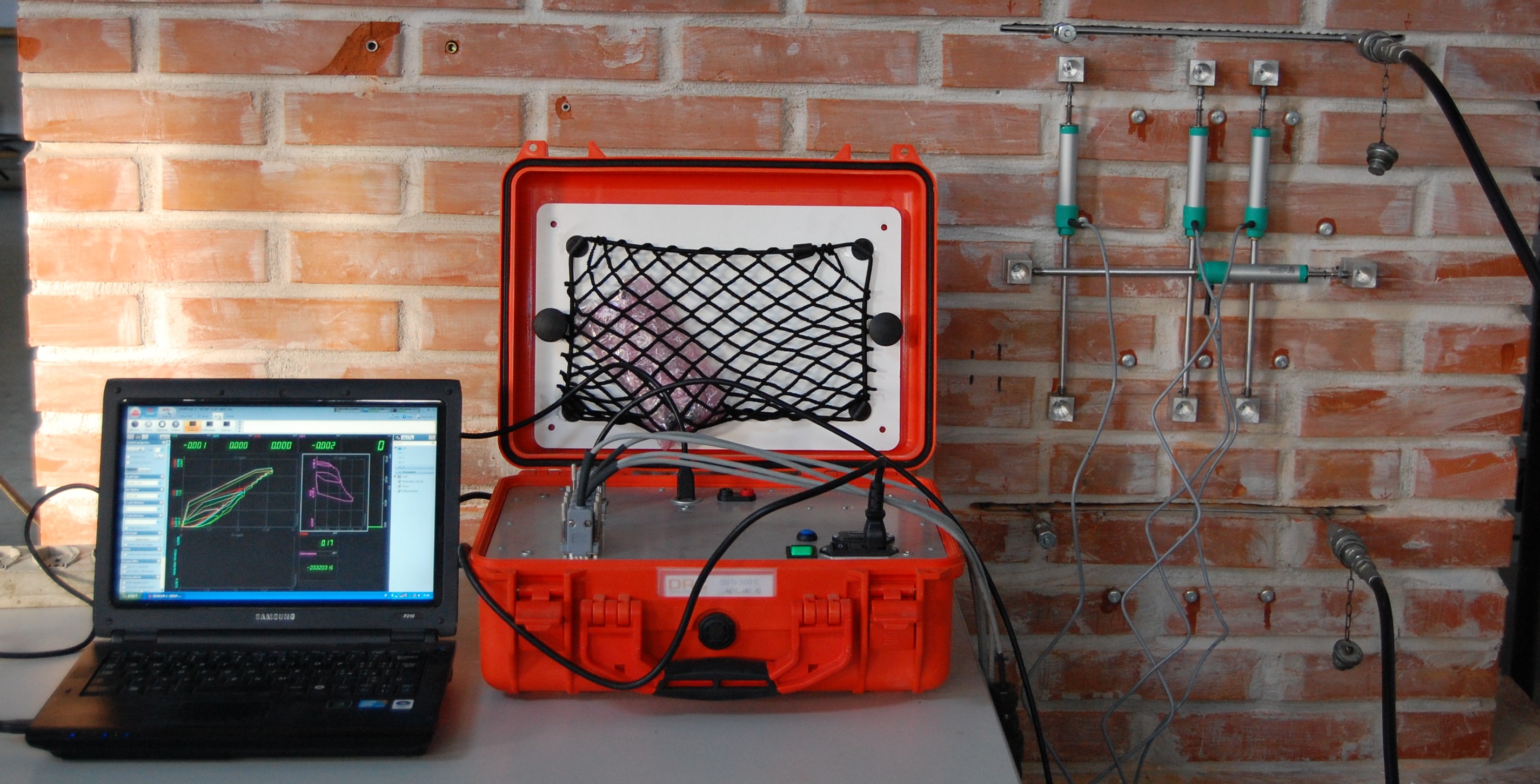 The endoscopic survey enables direct visual inspection of the cavity and parts of the wall which are otherwise inaccessible, inside the thickness of the masonry. By inserting a small endoscopic probe in holes of dia. 20 mm (minimum), one can study the surface of the hole to determine the stratigraphy of the masonry, including the types of material and presence of gaps. This can be done with flexible or rigid equipment, jointed and unjointed, with lighting. Depending on the type of used equipment, can change the diameter of the hole at the maximum inspection depth. It is important to use metric references when performing the survey. 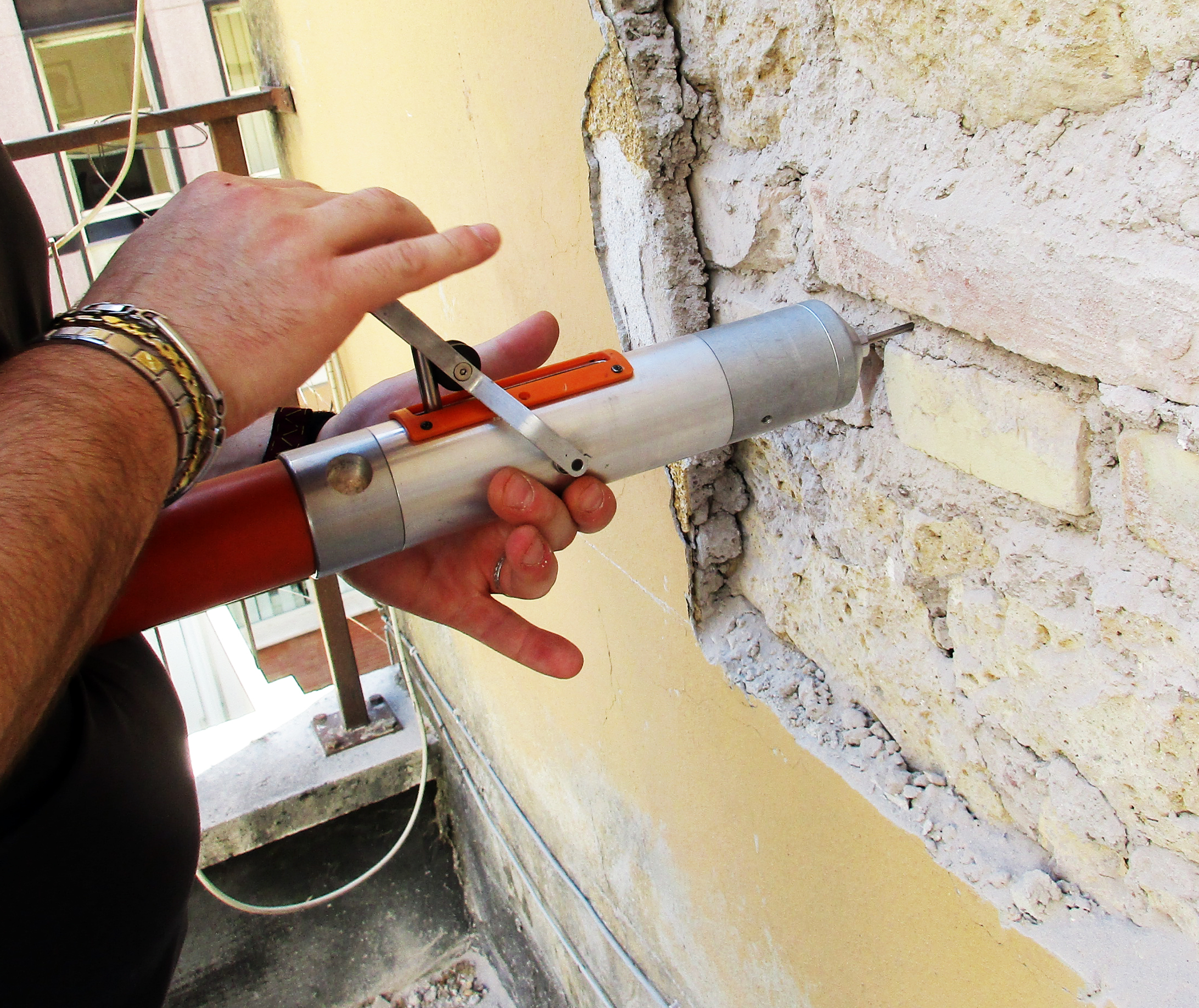 This instrument measures the response of mortar to needle penetration and correlates it to the mechanical performance of the material. The non-destructive testing performed through use of the penetrometer has the aim of providing information regarding the resistance of mortar joints to a steel needle driven using strikes generated with constant energy. The result that the penetrometer provides therefore regard penetration depth (expressed in millimetres) on the number of strikes. The mortar penetrometer provides information regarding the quality and homogeneity of mortar both along its thickness and compared to different points of the structure under examination. Correlation curves can be used to obtain an indicative estimate of the mechanical resistance of the mortar in relation to the penetration depth. The penetrometric test is non destructive since the depth of penetration of the needle enables us to estimate the mechanical strength of the mortar. 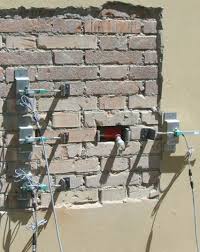 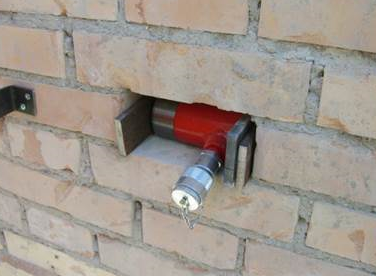 The Shove test (Shear), combined with the single plate jack test enables us to characterise the resistance to shear of the masonry on site, by measuring its effective resistance to shear t0. This may be done directly, by displacing an element of the masonry with a hydraulic piston, or with flat jacks applied vertically in the wall. Combined with the flat jack test, the shear test provides all the information required for the mechanical characterisation of the wall. The test consisting in displacing an element of masonry, isolated laterally from the rest of the wall, horizontally. The horizontal force is applied by a cylindrical jack inserted into the wall. 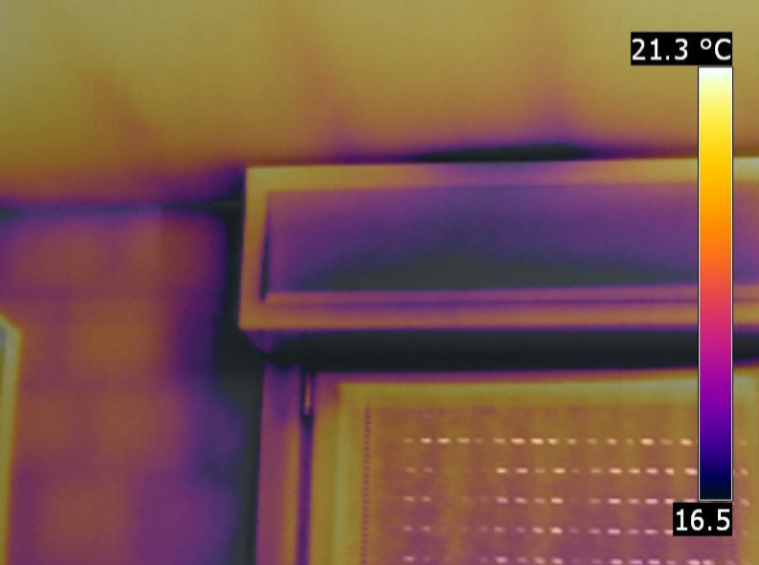 The term “Thermography” refers to a two dimensional false colour imaging method which represents the electromagnetic radiation emitted by any object above absolute zero ((-273,16°C). This radiation is normally emitted at a wavelength which is not visible to the naked eye. The advantage of this technique is that many measurements can be made simultaneously which, when processed, yield a thermal image of the object. Furthermore, since the measurements are made at a distance, without contact, the method does not affect the thermal condition of the object. Due to the diverse properties of the objects, they respond differently and have different temperatures when subjected to different thermal stresses. The operator exploits this fact to detect differences in the materials or structural faults. 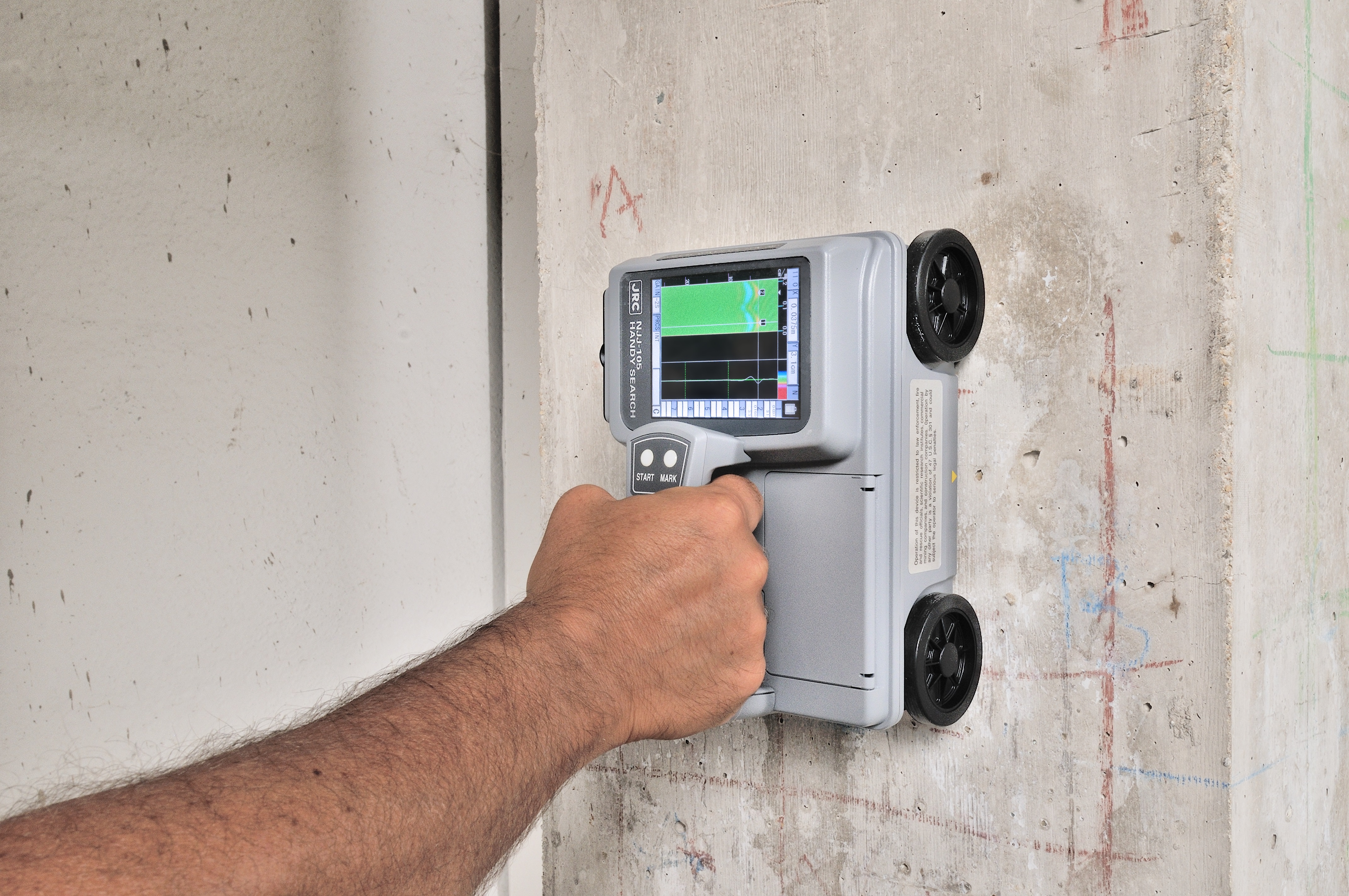 Radar measurement is a non-destructive method. By means of a series of radar measurements of the surface of the object, it is possible to identify some existing “anomalies” in the structure.

Radar system is based on the same principle of conventional radar, with specific differencies: 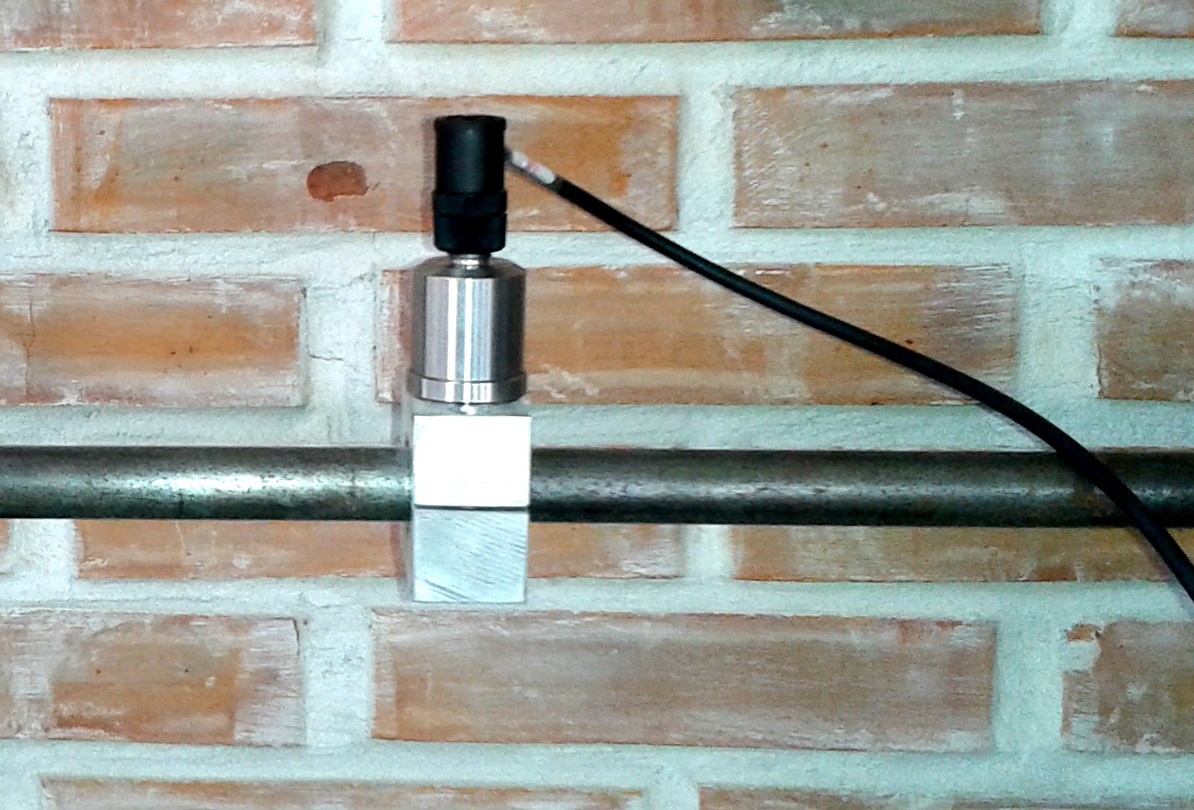 The technique identifies the vibrational modes of the chain and is completely non-invasive, since it generally consists in tapping the chain with a hammer fitted with instrumentation and measuring the acceleration of a point with an accelerometer. The first natural frequencies are identified experimentally, by measuring the frequency response function. The method enables us to detect the calculation of the axial force of the structural supports, without invasive action. This method, which is based on the modal analysis and optimization process, enables us to obtain the value of interest (tension in chain).

Manage Cookie Consent
To provide the best experiences, we use technologies like cookies to store and/or access device information. Consenting to these technologies will allow us to process data such as browsing behavior or unique IDs on this site. Not consenting or withdrawing consent, may adversely affect certain features and functions.
Manage options Manage services Manage vendors Read more about these purposes
Show preferences
{title} {title} {title}